Trash talk becoming the “in” thing 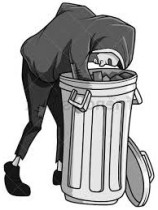 “Home is a notion that only nations of the homeless fully appreciate and only the uprooted comprehend.”― Wallace Stegner, Angle of Repose

I stumbled upon this unusual scenario Wednesday afternoon a few minutes before three after I parked my car in an almost empty Arby’s restaurant and did not realize at the time that the place was closed due to a recent COVID 19 infection.

The above scene captured my immediate attention due to the number of shopping carts slung together and the sheer volume of items strapped to each one.

I got out of my car, took out my ever ready camera, starting shooting photos and tried to obtain the best angle I could for the shot. There was a  vehicle parked at an unusual angle close to the man and I noticed that the driver was female. They were engaged in an animated conversation.

The woman in the vehicle was wearing a white face mask and dark glasses (photo at top right) noticed me taking the photos and yelled to the man beside her in a somewhat panic stricken tone of voice “hey, he’s taking my photo.”

To me this objection sounded totally ridiculous. She was wearing her face mask and the dark glasses only made her identity that much more difficult to determine.

I yelled back to the woman ” Don’t sweat it. I only want a few photos of the trash and not your identities”.

This reassurance seemed to calm both the female and her male companion.

It seemed strange to me that the woman , who was driving a fairly expensive vehicle,  was hob knobbing elbows with someone well below her own social level.

I wondered later if this meeting had been some type of secret tryst and that the man was wearing a disguise to protect himself from being recognized.

I got back into my vehicle and sought another restaurant that offered edible cuisine and not this type of real life melodrama.

I located a nearby Denny’s restaurant and enjoyed my late lunch. I enjoyed both the food and the fact that I had captured a few photos for my blog.